sitting on the bus.... waiting for it to leave Martinez, ew... but fortunately I have internet while I wait! yay!

Seriously, the auditions are the best part. Seriously.

Anyone see super scary glitter girl last night?? I was afraid to make eye contact! (yes, I know it was through a television, she was THAT scary.) I don't want her near anyone's pets. Yeesh.

Anyway... just been generally busy. Preparing for the move to Modesto, good times. I knew this feeing was coming on, but how lame do I feel, looking around at all these people getting ready to graduate. MARISA FAILS! WOO! No, not really, I knew early on this would happen, I'm okay with it. I figured I'd be one more for stringing college out, it'll be fine. In the meantime, I'm probably going to go into medical transciption to pay for all that college. YAY!

Okay, that's all for now.

So basically the entire time I was stressed out and running around in a hysterical fit (hormones have been CRAZY...) being broke and knitting like a mad woman... so much travel already, so many guilt trips... and I just realized I forgot to call my dad.... damn I'm a horrible daughter...

Before I pass out some highlights from the weekend's many events:
Orange Chicken and Ostrich
Guitar Hero
Bad Ass Les Paul
White Elephant
Absinthe
Trippin' on absinthe
Chick drinks that can kick my ass
Christmas in the park
Cigars
Twins
MeganMeganMegan and MargaretMargaretMargaret
Jager
Huddle
4 Joshes
Little flyers for little people
Salsa and cookies in the street
Fighting with wrapping paper, cheese, bread and nerf darts
My dog ran into my head with his teeth
Knitting, always knitting
Sweeney Todd


Besides, I just hadn't used this badass icon yet...
Merry Xmas and happy Yule

As part of one of our many random conversations, Josh brings up this point:

Girl on the street is hired on the street, a price is negotiated and agreed on, and you're good to go. This is illegal.

Girl is hired and given money to perform sexual acts on camera. This is legal.

I'm anxiously awaiting and anticipating the arrival of the decants of...

I also got decants of Peacock Queen and Rose Red, but I'm not too thrilled with those, but I'm SSOOO psyched for ( Collapse )

And now I'm wished I had nabbed Angernalia too.. oh well, I'll find it later. I already got Fruit of Paradise and it's really yummy but it's so soft I have to keep re-applying it...

This is becoming quite the problem...

Thurman Merman, that is. 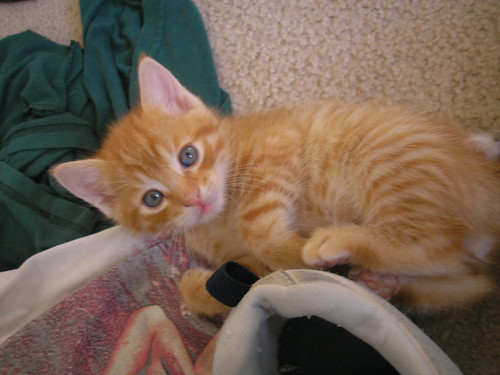 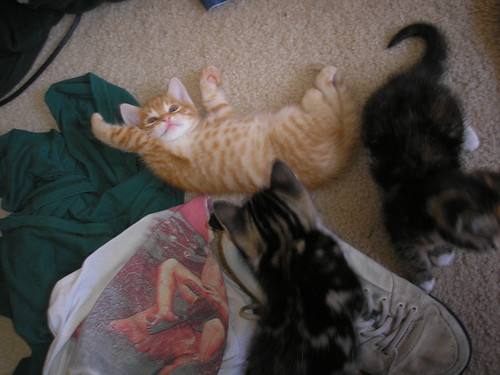 Josh's brother was trying to get his apartment management to let them have a cat, to no avail. Thurman needs a home! He's freaking adorable!


My mom is keeping the one on top of my shoe in the second picture (note the plasma sword marking on the back of his neck! He also has butterfly wings and racing stripes). Heather is keeping the only girl, the calico/tabby with the shock of orange on her face (no good pics, sorry) and I'm keeping the simple grey tabby, again no good pics, but here is a crappy video!
Thurman is battling Squints for king, Bodie (my mom's) is curled up on the edge of the bed and Fire-face (duh) is on top of the bed...

I seriously think I orgasmed watching the demo video.

OCTOBER '07
I freaking love this scent! I'm so glad I bought a 5ml bottle of it, it's amazing. It's seriously the first sample from BPAL I ever bought, who would have thought it'd be this amazing! Seriously... it's October.
Ay, thou art welcome, heaven's delicious breath!
When woods begin to wear the crimson leaf,
And suns grow meek, and the meek suns grow brief
And the year smiles as it draws near its death.
Wind of the sunny south! oh, still delay
In the gay woods and in the golden air,
Like to a good old age released from care,
Journeying, in long serenity, away.
In such a bright, late quiet, would that I
Might wear out life like thee, 'mid bowers and brooks
And dearer yet, the sunshine of kind looks,
And music of kind voices ever nigh;
And when my last sand twinkled in the glass,
Pass silently from men, as thou dost pass.

Dry, cold autumn wind. A rustle of red leaves, a touch of smoke and sap in the air.
Seriously.

And then there's Florence, which is AMAZING. And Black Opal, I freaking LOVE Black Opal. Eat Me was disappointing, it reminds me of Beaver Moon too much and I'm not even sure I really like that... hmm... Pannychis, in the vial anyway, has a lot of potential. Moon Rose is great too.

My room smells delicious by the way.

So as of the last few months, I've been 90% positive that in May I would be moving to Modesto to live with Josh and get things squared away with us financially and just be for a while before we decide on a course of action from there. We want to live together and it makes more sense to live there where he has a good paying job and rent is cheap rather than coming up here with a not good paying job where rent is expensive.

His shorter-term goal is to go into corrections (probably up here, because he has so many people in there rooting for him) but we need to get some stuff in order before that can happen. And since I'm just going to school, I can really do that anywhere, so for now, until I look at transferring, why not Modesto? Modesto is definitely a temporary solution, however.

But as of tonight, it looks like it will probably be around February when I go down there. Larry (step-dad) is thinking he will be buying a place in San Francisco rather than keep paying rent down there. To solve the financial end of this, they will be renting out a room and asking my brother and I to pay rent. I figure, if I'm going to be paying rent, I might as well be not living here anymore. So, February-ish it is.